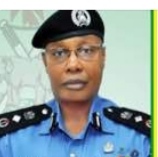 His appointment based on the President’s directive was communicated to the State House Correspondents at the Presidential Villa Abuja on Tuesday April 6, 2021 by the Minister of Police Affairs, Alhaji Maigari Dingyadi.

He will replace Mohammed Adamu, whose tenure had been characterized by situation where South East especially Abia and currently Imo states became the hot bed for violence and declaration of war on security agencies by terrorist Indigenous People of Biafra, IPOB, as the IGP in acting capacity until his confirmation or otherwise.

The President said Alkali’s appointment is with immediate effect.

The appointment of Baba hit Adamu as a surprise because earlier on Tuesday, he had visited the crisis ridden Imo State as IGP only for him to return to Abuja as former IGP.

Buhari had on February 4 extended the tenure of Adamu as the IGP for three months.

Adamu, who was appointed in 2019, had clocked the mandatory 35 years in service on February 1 and was expected to have been replaced by the president.

Mr Baba obtained a Bachelor of Arts (ED) degree in Political Science from the University of Maiduguri and a Masters in Public Administration (MPA) from Bayero University, Kano.

Until his appointment as the Acting IGP on Tuesday, he had held several positions in various commands of the force.

He served as Divisional Police Officer (DPO) in Yola, Gombe, Kaduna and Jos.

He also served in Ilorin, Kwara State as Area Commander, second-in-command in Ebonyi State and Assistant Commissioner, CID, in Kaduna.

He was Commissioner of Police in the Federal Capital Territory (FCT) and Delta State and subsequently served as the AIG in charge of Zone 5 Benin, Zone 4 Makurdi, Zone 7, Abuja, and the Maritime Police Command, MPC, Headquarters, Lagos, which is also zonal command in the force.

He was redeployed from MPC to the Loui’s Edet House Abuja as Force Secretary upon appointment of Mohammed Adamu as IGP in 2019 after which he was later promoted Deputy Inspector General of Police, DIG, in November 2020 and subsequently became DIG in charge of Force Criminal Investigations Department, FCID, a position he held until he was named IGP Tuesday afternoon in acting capacity by President Muhammadu Buhari.

Baba, who had also attended peace keeping operations internationally and several professional courses, had acted as DIG in charge of Finance and Administration.

He is a member of Course 22/2014 of the National Defence College (NDC) Abuja and also a Fellow of International War College.

Usman Alkali Baba being decorated with a honour by the NAGAFF leadership during his days as AIG Maritime Police Command Headquarters in Lagos.source:The Defender